Should You be Driving? Ask a Certified Driver Rehabilitation Specialist 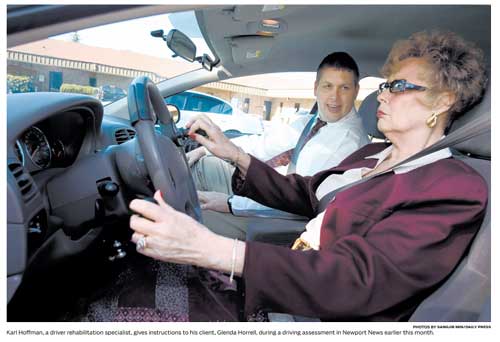 Karl Hoffman, a driver rehabilitation specialist, gives instructions to his client, Glenda Horrell, during a driving assessment in Newport News.

For Donald Hankley the worst thing about moving to an assisted living facility in October 2007 was giving up his automobile. Two serious urinary tract infections had left him unable to walk, when his son asked him to stop driving. He duly sold his car.

Hoffman is one of only two such certified specialists on the Peninsula. The other, Hampton-based Matthew Pagels, a kinesiotherapist who retired from the Veterans Affairs driving program in 2007, contracts with both the Glennan Center at Eastern Virginia Medical School in Norfolk and the Center for Excellence in Aging in Williamsburg to conduct driver evaluations on the centers’ simulators. Three months ago, Pagels also started conducting behind-the-wheel assessments.

Hoffman’s business grew out of his training as an occupational therapist. “We work with people to get them to do what they need to do. Being able to drive, get where they need to go are part of ‘activities of daily living.’ We help them maintain mobility as long as possible,” he says. That’s the ultimate goal, agrees Pagels. “It’s not to take licenses away, though people coming in for evaluation may not believe that.” 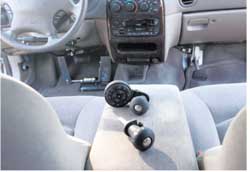 A steering knob, front, and a turn
signal control are commonly used
adaptive equipment for drivers who
have physical impairments.

Doctors can help determine whether someone should drive For almost 10 years Hoffman ran the adaptive driving program at Riverside Rehabilitation Institute, before branching out on his own in 2006. As the holder of a commercial driving instructor’s license, he now teaches new drivers with disabilities, such as autism, spina bifida, or cognitive issues, as well as conducting assessments for adults who’ve had strokes or sustained other brain injuries. Most of his clientele are seniors whose driving abilities are changing, and often it’s an adult child who requests the evaluation.

“We can never assume that aging alone makes someone not a safe driver,” says Hoffman, who notes that it’s important to find the right time for a driver to quit and that families are often not the best judges of that. “One accident and it’s too late,” he says, ” but too soon, and it cramps a lifestyle and can end the ability to live at home, see the grandchildren and so forth.”

Driving rehab specialists also act as impartial buffers between medical professionals –– “we can give them an out” –– and their patients, who may drop their care if they feel their driving privileges are threatened. Seniors who are drivers are more engaged in the community, interact more with others, and tend to eat better and be healthier, Hoffman says. He observes that issues of judgment and decision-making when driving can be very similar for teens and seniors. The question for Hoffman is how immaturity or changes attributable to aging affect a person’s ability to operate a car safely.

In Donald Hankley’s case, physiotherapy improved his abilities and mobility dramatically. So much so, that last month, when his son, Chip, made his first visit since last August from his Wisconsin home, he discussed the possibility of his father driving again. In seeking out someone unbiased to make the determination, they came to Hoffman.

Hankley then took a standard two-part test, an hour in the office for a clinical assessment of his physical, cognitive and visual skills along with his general driving knowledge, then another hour driving Hoffman’s silver Chrysler Concorde sedan. The car lacks a central console, an essential feature for Hoffman: “That way, if they freeze with their foot on the gas pedal, I can kick it off,” he says. After successfully negotiating a stretch on the interstate Hankley got the green light to apply to the Division of Motor Vehicles for an unrestricted license. The one proviso Hoffman recommended for Hankley was an annual re-evaluation.

Pagels, who has assessed clients as old as 95, notes it’s hard to predict how quickly people will either progress or decline, so requiring a 12-month check-up can provide a safety net. “There are no perfect drivers out there. Everyone makes errors. We’re looking at the risk and deciding if this person will drive safely.”

Many times, though, it’s not necessary to stop driving altogether. Both specialists work to extend the driving life of clients, whether through recommending modifications to the vehicle, through teaching them compensatory strategies, or by placing restrictions on when and where they can drive. Recently, Glenda Horrell, diagnosed with a mild form of dementia, took an assessment with Hoffman and then passed the necessary Division of Motor Vehicles test to allow her a restricted license. “I can only drive in the day time, not on the interstate and not in bad weather,” says the 62-year-old Horrell.

“We tailor the driving environment to maximize their safety,” says Hoffman. For those prone to fatigue, he’ll recommend a driving radius, for those with slower reactions, an upper speed limit, and so forth. “When there’s no other option, we’ll recommend ‘driving retirement,'” he says. “The goal is to prolong community mobility, but there’s no wiggle room in a reasonable safety standard.” To that end, he will go to a client’s home and have them drive their regular routes in their own environment to assess those seeking a limited license.

Both Hoffman and Pagels agree that cognitive ability, rather than physical or even visual ability, determines whether someone can drive safely today. Advances in technology mean that physical disabilities are no longer a barrier, even for those missing limbs.

So, it’s now alertness and attentiveness that have become the measures of the ability to drive safely. And while adaptive equipment can compensate for almost any physical disability, there is nothing anyone can put in a car to counteract poor judgment, inattentiveness or fatigue.

Matthew Pagels is a certified driver rehabilitation specialist who conducts behind-the-wheel assessments through Pagels Driver Rehab Services, Hampton, 692-0973. He also contracts with the Center for Excellence in Aging, Williamsburg, to conduct simulator assessments, and he performs some behind-the-wheel evaluations for Glennan Center at Eastern Virginia Medical Center clients if they have difficulty with the simulator driving environment.

The Department of Motor Vehicles maintains a list of those qualified to do driver evaluations at dmv.state.va.us/webdoc/pdf/cdrslist.pdf.

Doctors can help determine whether someone should drive