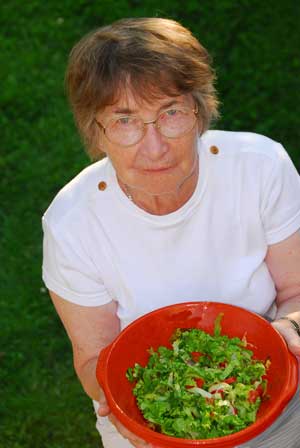 Once again, the media has taken hold of an isolated study and the Internet has run rampant with advice on the topic. What I am referring to is a recent email I received, which contained a strong suggestion that Alzheimer’s patients be served food on red plates. According to an article that covered the study: “…some nursing homes have made red plates the norm. A private company has even marketed special red plates for seniors with visual impairment.” Why? Because some dementia patients struggle with eating enough food to maintain good health, and presumably using red plates caused these people to eat more. But are red plates the solution?

The email suggesting the use of red plates for dementia patients linked to an article written by Jeremy Schwab. The study showed that advanced Alzheimer’s patients’ level of food intake was 25% higher when they were served food on bright red plates instead of standard white plates, and an 84% increase in fluids when using red drinkware.

To me, this advice would seem suitable for any elderly person who may not be eating enough calories and not just Alzheimer’s patients. However, the article reminded me of a piece I had read sometime in the 70s or 80s, where plate color was discussed as a dieting aid for everyone. I remember the older article suggesting it was the contrast between the food and the plate that had an influence on the amount of food one consumed.

I’m not saying the researchers didn’t’ see a 25 percent increase in food consumption for Alzheimer’s patients who used red plates—I just didn’t think it was the whole story.  I decided to do some digging for the article I had read years ago. I was unable to find it, but I did find a newer study by those same people who are now saying that blue plates work, too. However, I eventually found another study that I think tells the whole story. One you should be aware of before you buy red or blue plates for dementia patients or you might be disappointed in the results from your purchase.

The Whole Story: Newer Study is More In Depth and Implies that Red Plates ( or blue) for Alzheimer’s not Necessarily “the Solution”

This newer study was set up to explore the Delbouef Illusion’s Bias on Serving and Eating Behavior. If you are not familiar, the Delboeuf illusion is an optical illusion of relative size perception. The best-known image exemplifying this illusion is two circles of identical size placed near to each other and one is surrounded with another circle. The one surrounded by another circle looks larger when in fact it is not.

The researchers in this newer study, “Plate Size and Color Suggestibility”, did not come to the conclusion that red plates for dementia patients would cause these people to consume more. However, they did make the following suggestions to people who are trying to encourage the elderly, and others, to eat more:

A direct quote from the actual study (emphasis mine):

Important danger to note is with individuals who have eating disorders or who otherwise need to eat more to maintain their health (such as the elderly). The tendency of these people would be to take smaller dinnerware. Yet just as larger dinnerware leads to overserving (compared to what would be typical), smaller dinnerware leads to underserving. The result is that smaller dinnerware would lead these vulnerable populations to serve and consume even less than they otherwise would. One possible solution is to provide these people with larger dinnerware. Alternatively, provide them with dinnerware that contrasts with the food, or replace the tablecloth with one that minimizes the color contrast with the dinnerware. – Plate Size and Color Suggestibility: The Delboeuf Illusion’s Bias on Serving and Eating Behavior ,Koert Van Ittersum and Brian Wansink, Journal of Consumer Research, Vol. 39, No. 2 (August 2012) (pp. 215-228), Electronically published November 11, 2011

We Are Influenced by More than Plate Color

So the full story, according to this newer study, is that how much one consumes is highly influenced not only by plate color, but also by plate size and even the background (tablecloth) the plate is placed upon. Thus the solution suggesting that you use red plates for dementia patients is only accurate if you are serving light colored foods, such as mashed potatoes. Whereas fresh tomatoes, strawberries, and tomato soup, which are themselves bright red would be better served on white or bright non-red plates.  Serving these foods on red plates would not increase food consumption because there would be insufficient contrast between the food and the serving dish.

Now keep in mind that this technique of serving food that is in high contrast with the plate it is being served upon (or cup/liquid) is a method that helps those who are having difficulty seeing. Clarity of vision often plagues the elderly and those with Alzheimer’s.  So increasing the contrast between food and the item it is being served with will assist them in both seeing and consuming the food or liquid. As the original article touting red plates for dementia as a solution stated, “if you couldn’t see your mashed potatoes, would you eat them?” So Sometimes choosing a red plate for dementia patients is the right choice.

Don’t be Confused by “Insufficient Clarification” in Some Articles

The new study shows the answer isn’t simply red plates for dementia patients, even though you find red plates touted as a solution from many sources.  As you can see, the newer study offers greater insight, into what works. However it is also receiving reporting by the media that is confusing and even contradictory. That is because the study was testing how sizes and colors influence eating AND how they influence self-serving of food. Some media outlets have reported you will increase food consumption if you serve food on plates with minimal contrast. This is based on the result that the study showed we have a strong tendency to over serve ourselves if we are placing food onto a plate that has little contrast to the food.  Thus if you are serving yourself and you want to eat more greens then you should use a green plate. In the process of self-serving you will put more greens onto a green plate than you would a white plate. And if you want to eat less Alfredo, then serve yourself Alfredo on a red plate. With a red plate you are better equipped to see how much Alfredo you are serving yourself. The contrast between food and plate means you are more likely to make the serving smaller, and thus eat less. This was only the self-serving portion of the study, and it would be helpful if the media made this clear.

What Plate Color to Choose Lies in the Goal 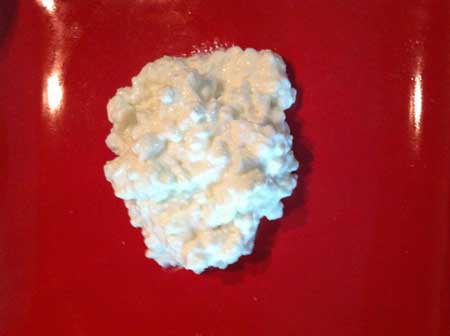 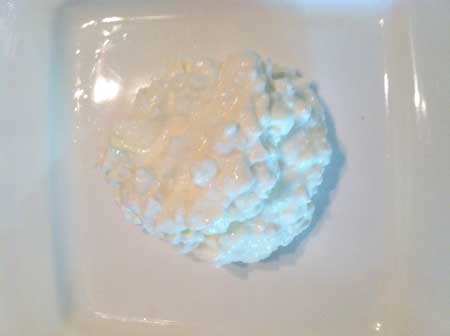 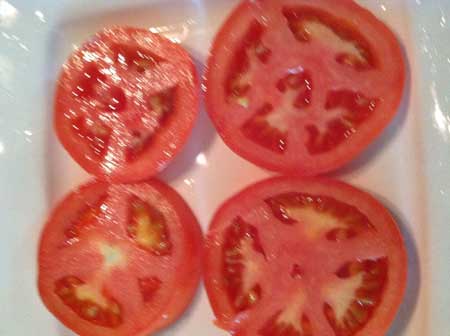 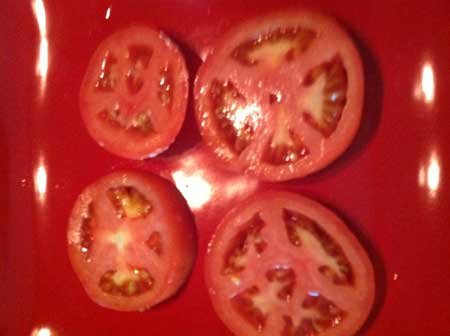 So which is it? High contrast or low contrast? As with all things, it depends on what your goal is. If it is serving yourself smaller portions, then you want high-contrast between your plate and your food.  It helps you delineate your food from your plate and is likely to cause you to serve yourself less food.  If the goal is encouraging the elderly to eat more, then the study shows that a high contrast between plate and food will encourage the elder to eat more because they can see the food. The authors of the study clearly state this in their study summary, which was included earlier in this article. 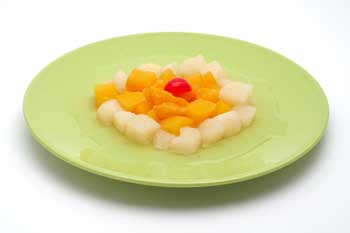 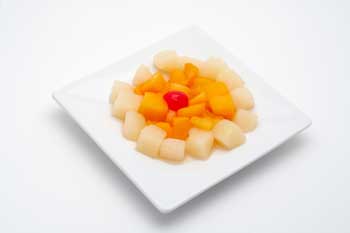 Same Serving Size looks like less food. Pears stand out more. Photo Credit: Rafa Irusta
Looks like a lot more fruit and pears disappear on plate. Photo Credit: Rafa Irusta
By making it more likely for the elderly to see and enjoy their foods, we can accomplish increasing their food consumption with a greater success rate. So when serving the elderly, remember that a high color contrast between the food and plate will naturally influence you to serve smaller portions. However when the food is placed before the elderly the high contrast will make the food appear more enticing and make it highly visible. This contrast between food and plate will influence the elder’s desire to eat the food and their ability to see it.  Remember, too, that if you place a serving on a larger plate it will look like a smaller serving. This can also be utilized to increase the amount a senior eats. Now you not only have a method of helping your favorite elder eat more, you also have a method for helping you eat less.